A Tribute to Jean Dunand

The Art Deco movement is one that we return to often in our quest for artistic inspiration. It grew in popularity during the 1920s and 30s and is characterized by bold geometry and rich, intricate decorative motifs and accentuated metal accents. Each of these elements finds its way into our work at Pigmentti, and we often experiment with adapting them for the contemporary moment. One of our biggest artistic inspirations from this movement is Jean Dunand, a French designer best remembered for his exquisite creations in lacquer and metal. 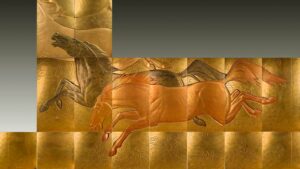 In this month’s post, we’re delving into Dunand’s aesthetic and the ways we interpret his vision in our work as decorative artists today. Read on for insights into why this sculptor and designer became one of the most extraordinary designers of the early 20th century.

Who was Jean Dunand?

Born Jules John Dunand in Petit-Lancy, Switzerland, Dunand started studying sculpture and design at the École des Arts Industriels de Genève at the age of 14. Summers spent learning from a local coppersmith in Geneva, though, were some of his most formative experiences. It was there that he refined the technique of dinanderie, which he’d later gain a favourable reputation for. Dinanderie is a type of late medieval metalwork associated with the city of Dinant, Belgium, which involves embellishing non-precious metals such as brass with gold and silver. The end products amplify seemingly ‘simple’ metals into works of exquisite decorative art. 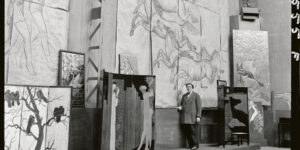 How did Dunand’s style develop?

Like many artists and craftspeople throughout history, he travelled widely and picked up new techniques along the way. In 1887, for example, he moved to Paris for an apprenticeship with the Art Nouveau sculptor Jean-Auguste Dampt. It was through Dampt that he developed an appreciation for the ovular and geometric forms that characterize this period in the decorative arts. Around this time, people’s interest started to grow in his works of dinanderie and, slowly, Dinand shifted his focus towards this sought-after technique. 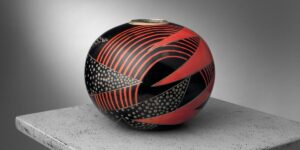 In an effort to tackle the issue of metal erosion, he began learning the art of lacquering from Japanese practitioner Seizo Sugawara. Sugawara taught him how to manipulate intricate forms of lacquer to protect his metal creations without sacrificing their aesthetic beauty, and in return, Dunand taught Sugawara the art of dinanderie. An artist by nature, Dunand quickly picked up these intricate techniques and began introducing them to his works. 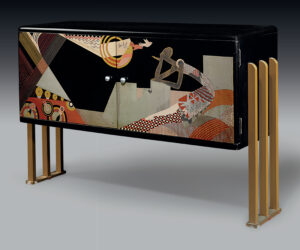 As his confidence and expertise grew, he started using a prestigious Japanese technique called coquille d’oeuf, which involved introducing tiny shards of eggshell into the lacquer. The result of integrating this notoriously difficult technique was that it elevated his designs, giving them a finer depth of detail. As a result, Dunand started expanding the breadth of his work from small objets d’art such as vases, into larger panels, cabinets and full-scale interiors installations. 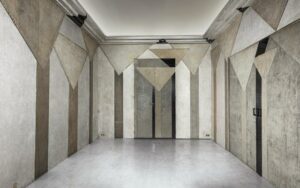 Some of the works we most admire from Dunand are these pieces of lacquered cabinetry and panelling. They encapsulate the timelessness and artistry we aim to achieve in our works of decorative art at Pigmentti. In the golden gilded horse panel pictured below, for example, it’s clear to see that Dunand’s works exist within a liminal space between ‘typically Art Deco’ and temporally ambiguous. In other words, they are timeless and it’s a quality that we look for when gathering inspiration for our own projects. 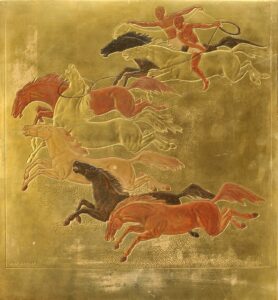 A look at some of his best-known works

Dunand continued creating significant interiors panels in metal and lacquer, gaining more and more recognition for the skill and finery associated with his designs. A few more examples that we look towards include his folding screen, pictured below. These depict natural motifs rendered slightly abstract thanks to, once again, Dunand’s love of all things Art Deco. 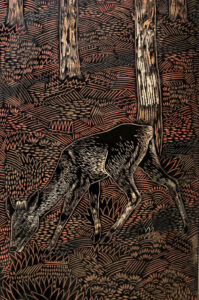 A pivotal moment in Dunand’s career came in 1925, when he was commissioned to decorate the luxury ocean liner, Normandie. The ship took four years to build and was designed to carry passengers from Le Havre and New York, calling at Southampton, England, along the way. Dunand was tasked with decorating its interiors, using his knowledge of the intricacies of dinanderie and lacquering to transform the ship. As a multi-talented designer and sculptor, Dunand got involved in every aspect of the project. He oversaw the technical systems, production and intricacies of decoration throughout, and his dedication paid off. Normandie was widely touted as a masterpiece in Art Deco design. 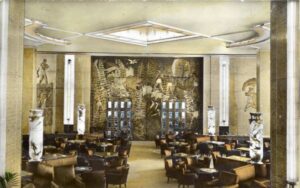 Another important point in Dunand’s career was his contribution to a French Art Deco cabinet designed by Eugene Printz, which sold at Christie’s New York for a record-breaking $5.49 million. Dunand was commissioned to lacquer the piece once Printz had designed it, and the finished cabinet is often referred to as a collaboration between “two of the most important designers of the Art Deco period.” Together, the designers’ expertise enabled them to create something completely original, with Dunand developing intricate surface textures and subtle tonal gradients to heighten the originality of the piece. 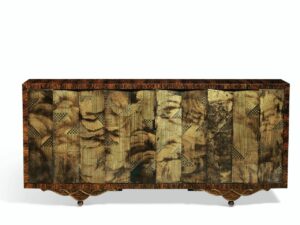 If we were to sum up what’s so special about Jean Dunand as a decorative artist, it would be his dedication to amplifying techniques that are steeped in history and making them relevant to contemporary design. It takes a very specific kind of artist – and intensive dedication to the craft – to do this in a way that maintains the integrity of materials and techniques. As we plan and start work on upcoming projects, we’re continuing to dig into Dunand’s incredible catalogue of work and look forward to sharing with you the infinite possibilities of his artistic techniques.