A Tribute to Umberto Boccioni

As decorative artists, we wouldn’t be producing the work we do without the influence of generations of those who came before us. From the classical era to the contemporary period we live in today, fellow artisans have carried forward techniques dating back centuries.

What fascinates us at Pigmentti is tracking down the stories, artworks and achievements of some of the greatest decorative artists in the world. It’s humbling to trace back the tools and techniques that are used in our line of work today and to honour those who pioneered them. It’s also an integral part of how we develop as artisans. With that in mind, through 2021 we’re creating a series of blog posts to share the work of figures who most inspire us. This month we’re introducing you to Umberto Boccioni, the leading artist of Italian Futurism. 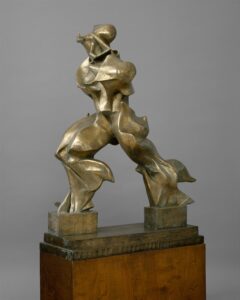 What is Italian Futurism?

Before we delve further into Boccioni’s status as a leading artist of Italian Futurism, let’s talk about the movement itself. This was an Italian art period that started in the early 20th century with the aim of capturing in art the dynamism of the modern world. Artists within the movement wanted to depart from what they considered to be the fusty style of traditional art. They were interested in creating works with boldness and energy – think representations of speed, technology, transport, urban landscapes and motifs associated with rapidity and development. Popular techniques used by artists of the movement included repetition, blurring, and lines of force. 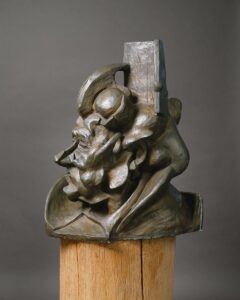 Who was Umberto Boccioni?

Born in 1882 in Reggio Calabria, Italy, Umberto Boccioni produced some of Italian Futurism’s most iconic paintings and sculptures. He trained in the technicalities of draftsmanship in Sicily before receiving tuition from commercial artist Giovanni Maria Mataloni. You can see this influence and technical ability very clearly in works such as Study for The Story of a Seamstress: Sewing Machine, one of our favourite studies by Boccioni. He later joined the studio of painter Giacomo Bella, where he started experimenting with Bella’s signature style of Pointillism merged with intuitive brushstrokes and colour. 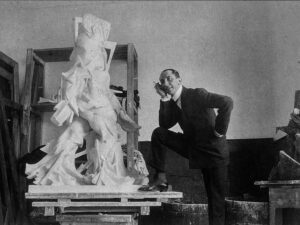 Through the early 20th century Umberto Boccioni travelled across Europe, absorbing the cultures, styles and paces of life that would later inform his artworks. It was in Milan in 1910 that Boccioni’s technical education and flaneur lifestyle finally came together. Here, he joined forces with fellow artists Carlo Carra and Luigi Russolo to write “The Technical Manifesto of Futurist Painting”, which called for the abandonment of traditional subjects like the nude. This was the first time anyone had put into words the theories behind Italian Futurism, and it became a widely studied text. 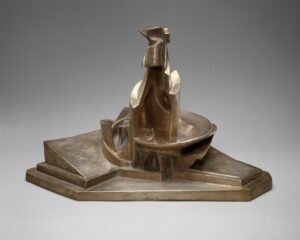 How did Umberto Boccioni’s style continue to develop?

As is the case with most artists, Umberto Boccioni picked up new influences wherever he went and built on them to form his own distinct style. Moving through the 1910s he drew inspiration from the Cubists, introducing the motifs of fragmentation and multiple perspectives. Examples of his works in this period include States of Mind (we particularly favour version two, exhibited in MOMA New York) and Elasticity. What we appreciate about these works is Boccioni’s ability to capture the essence of his subject. He does so using a blend of traditional technique and emerging styles that weren’t yet defined as part of their period, merging technical precision with intuitive abandon. 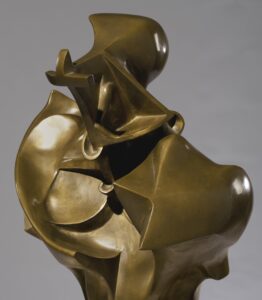 Sculpture plays a significant role in our work at Pigmentti and it did for Umberto Boccioni, too. We mentioned earlier in the post that Italian Futurism is associated with dynamism and swift movement, and that translates into his works of sculpture. To us, Boccioni’s sculptures are where his multiple influences truly hold their own. One of his most famous pieces is Unique Forms of Continuity in Space created in 1913, which you might have seen if you’ve ever visited the Tate Modern in London. This is an example of Italian Futurism at its peak. Boccioni was a pioneer within a movement that enthused about industrialisation and new inventions. It makes sense, then, that one of his ‘star’ sculptures depicts a body exaggerated in movement so that it “embodied the urge towards progress.”

Later in his career, Boccioni moved away from inherent dynamism and found influence in the style of French post-impressionist painter Paul Cezanne. Instead of creating abstraction through geometricity, in works such as The Charge of the Lancers and The Street Pavers he uses depth of colour as a site of movement. 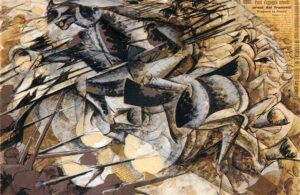 How has Umberto Boccioni influenced the work of Pigmentti?

We’ve mentioned throughout this post that Umberto Boccioni was interested in progress: industrialisation, automation, the seemingly limitless possibilities of invention. What we admire about him is the way in which he imbues geometric form with spirited energy and dynamism, experimenting with influences and never feeling bound to the status quo. Though he only lived until the age of 33 – dying while volunteering in the Great War – Boccioni’s works transcend the periods and remain as relevant today as they did more than a century ago.