Are We Approaching a New Renaissance?

Home / Blog / Are We Approaching a New Renaissance?

At Pigmentti we’ve spent years studying the most influential periods in art history, and one thing we’ve learned is that knowledge and creative output often increase in times of crisis. They tend to force people to rethink their lives and come up with alternative ways of being.

Right now, that’s exactly what we’re all experiencing. Everything we all knew to be ‘normal’ and the things we perhaps took for granted have shifted suddenly and unexpectedly.

We know culture might not be your top priority at the moment, but we wanted to share our thoughts on how the current situation could mark the start of a creative renaissance. It seems distant right now, but new opportunities will arise from this.

We hope exploring the ways past crises shaped the creativity you see today will help to give you a different perspective. 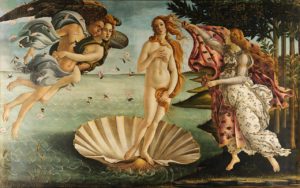 The birth of Venus – Botticelli

What happened in the Renaissance (pre and during)

Let’s first consider the word ‘Renaissance’. It’s French for ‘rebirth’ and is now used in English to describe what the Tate defines as “the great revival of art that took place in Italy from about 1400 under the influence of the rediscovery of classical art and culture”.

This cultural rediscovery was fueled by the social, economic, and political changes that came from significant human tragedy: Black Death, also known as the Plague. The Plague killed around 50 million people around the world, and shook Italy to its core when it hit in 1347. It slowly marked the end of the highly religious Middle Ages, partly because people began to question authority.

The world had changed dramatically, so people looked for new ways to understand it. They turned to reason and the classics. As the grieving society began to heal, people started to seize life again and find joy in the arts. Rich patrons began to commission artists, and the themes those artists were painting started to shift, too.

Religious paintings were still popular, but people were increasingly interested in art that focused on secular themes and the classical world. If you follow our work at Pigmentti, you’ll know we’re influenced by the works of Renaissance maestros. Many of the techniques we use as decorative artists were developed in the Renaissance. 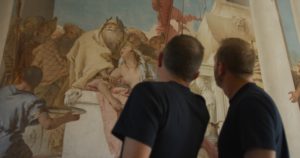 Art during the Renaissance (what were the main creations and new techniques?)

The ‘early Renaissance’ started in 1401 and carried on until around 1490. One of the earliest Renaissance artists (and one that we return to time and time again for inspiration) was Masaccio. His themes were mostly religious, but he revolutionised painting by using ‘one-point linear perspective’ to create the illusion of three-dimensional space.

We’ve talked before about trompe l’oeil – a technique that creates the illusion of three-dimensionality – and here it is in action. It’s worth noting that trompe l’oeil was first used in Ancient Greece, so it’s not surprising that Masaccio brought it back to life in a period influenced by the classics. His paintings also played with light and shadow – a technique known as chiaroscuro – to create depth and realism, in contrast to the ‘flat’ style of pre-Renaissance religious art. 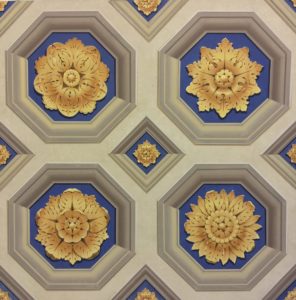 Another artist working slightly further into the early Renaissance period was Andrea Mantegna. He created the first example of illusionistic ceiling painting in the Camera Degli Sposi frescoes. For us at Pigmentti, ceiling-work, fresco work, and trompe l’oeil are three of our most used techniques, and they come together in Mantegna’s masterpiece ceiling. 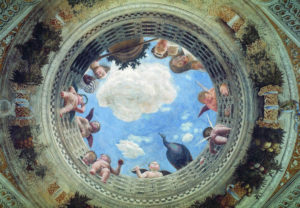 Each of these styles and techniques was taken to greater heights in a period known as the High Renaissance, which started in around 1490 and lasted until 1520. This period birthed some of the best-known artists of the Renaissance: we’re talking Michelangelo, Da Vinci, and Raphael.

Michelangelo sculpted David in 1501, and it was the first time since the classical era that a male nude had been carved in marble. Leonardo da Vinci’s Mona Lisa was radical because until he painted it, women had only ever been depicted in profile. His works were also informed by mathematical perspective and realism, part of the ‘new way of thinking’ that we mentioned earlier in this post.

A few more examples of innovations at the time include the popularity of oil painting and of quadratura – a focus on merging ceilings with architecture using trompe l’oeil – as well as new formulas and applications of fresco. 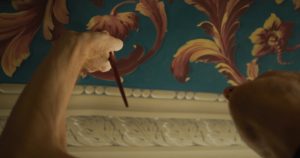 By looking back to the Renaissance, it’s clear to us that creativity can thrive in times of crisis. Over the past few weeks, we’ve been considering what that might look like. Most obvious to us is that social distancing measures mean many people – or at least those who don’t work in essential services – are at home. We’re not socialising or consuming culture in the same way we usually do.

On top of that, we’re all experiencing something new and uncertain. This combination of isolation and uncertainty might, we think, mean more people turn to creativity as a way of finding meaning and gaining perspective. This current struggle could draw attention to our need for human connection, too.

The creation of Adam – Michelangelo

We know creativity has always been a way of bringing people together. It can help us to find clarity and share that clarity with others. It can be a way of mourning what we’ve lost, expressing what we’re feeling right now, and slowly starting to rebuild.

It’s also become clear to us at Pigmentti that society was moving at a ridiculously fast and unsustainable rate. We’re now being forced to slow right down and turn inward. Some might use this time to reflect – on priorities, ways of living, relationships, or society as a whole – and from that reflection might come a new language, and maybe a more thoughtful way of living. It might make us choose the artisanal, traditional, and independent. We might also set ourselves to a slower pace. 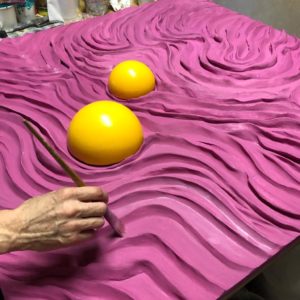 How can we be focused and maximise creativity (learning and applying)

One of our oldest favourite quotes particularly resonates right now, and it’s one often attributed to Leonardo da Vinci: “Learning is the only thing the mind never exhausts, never fears, and never regrets.” 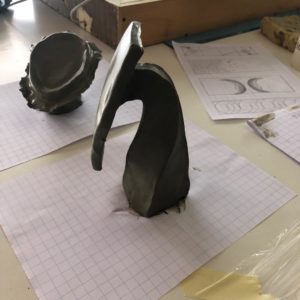 We know it won’t be possible for everyone to learn a new skill or spend an afternoon dabbling with paints right now. And it’s perhaps not the time to put pressure on ourselves to ‘be productive’ and maximise every waking hour. What we do know, though, is that dedicating small chunks of time to learning something new can be a huge comfort.

Our main advice would be to let go of your own expectations. You don’t have to spend hours working on being creative for it to make a difference. We’d suggest ring-fencing a short burst of time to focus solely on learning and applying your creative outlet of choice. 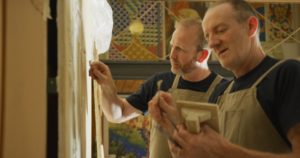 We don’t know about you, but it seems clear to us that this unprecedented time will result in a significant shift in culture and society as a whole. What that shift will look like, though, depends on how far we’re prepared to let go of our old ways of thinking and embrace something new.

Are we ready to slow down and live more consciously, show empathy, and consider each other? Only time will tell, but at Pigmentti we hope we’ll come through this as a collective: stronger and emboldened by a new way of thinking.