Blue art is having its moment, or so it seems. From the minimalist abstraction of Picasso prints to feature walls awash in Yves Klein bleu, we’ve noticed the colour blue appear more and more over the last few years. Yet it’s not accidental that certain colours capture people’s attention more than others and become de rigueur in contemporary design. Their use, placement and how they make us feel play a vital role in shaping their enduring appeal. 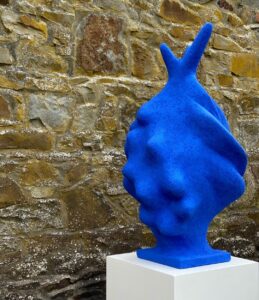 Blue is a colour that’s steeped in history, spirituality and symbolism. Centuries of meaning and usage are layered within its soothing, protective essence. With the history and psychology of colour in mind, this month we’re considering the specific ways that blue art is used in interior design. We’re thinking about the factors that shape its use, including its impact on our wellbeing and the meaning behind the colour itself. 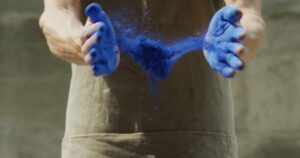 The meaning of the colour blue

Meanings associated with colour vary across cultures, countries and moments in time. Their origins lie in the interplay of biological and psychological effects, and cultural relevance. Blue, though, happens to have a greater range of meaning than most. In many Middle Eastern countries it’s synonymous with safety and protection, while in highly Catholic Latin American countries it’s often associated with hope and good health. 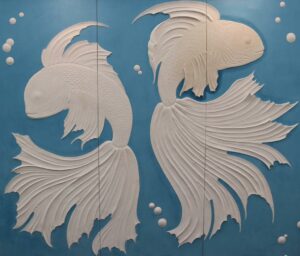 Religion has its own unique connections to blue, too. In Judaism blue is linked to divinity. And to some, the Hindu deity Lord Krishna is often depicted in blue because the colour symbolises infinity. This idea of blue representing infinity carries through to nature – where it is, of course, the colour of the sea, sky, and mesmeric space where they converge. 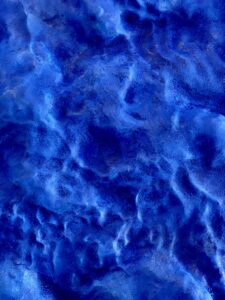 Blue is also often considered a state of melancholy in the West, where the colour merges with the emotion of feeling ‘blue’. And yet its associations with serenity, balance and trustworthiness pervade. Perhaps this is down to the fact that blue has such widespread and deep-rooted meanings that span nature, spirituality and religion. In this way, it’s clear that millions of years of conditioning have strengthened the connection between colours and emotions. 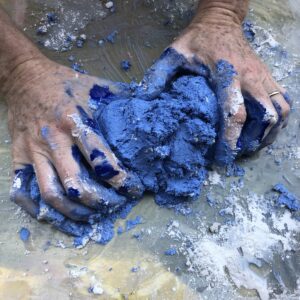 How does the colour blue impact our wellbeing?

We mentioned earlier that psychological effects help to shape the meaning of a colour. Blue happens to be one of the strongest on the psychological spectrum. To explain this, we need to look to science. When light shines on an object, it absorbs the full colour spectrum apart from the colour you see. Blue has the shortest light wavelength, so it isn’t absorbed as easily and is therefore the colour that’s often clearly seen. In short, it draws out light and is a simple way to inject colour into a room. 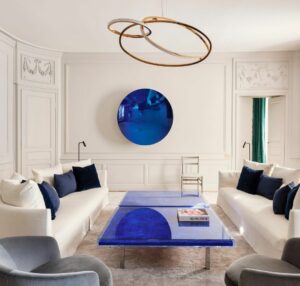 Blue’s calming properties are backed by science, too. Back in 2018, researchers found that exposing people to blue light for 30 minutes significantly reduced their blood pressure. When you consider that research together with the fact that blue is a light-producing wavelength, it makes sense that the colour is known for its uplifting properties. This is true for all of its shades, though of course each has a subtly different impact on our emotions. Deeper, moodier hues often embody boldness and confidence, while lighter ones instil tranquility and ease. That’s the thing about this colour: its shades are versatile, adaptable and can be tempered to suit almost any design aesthetic. 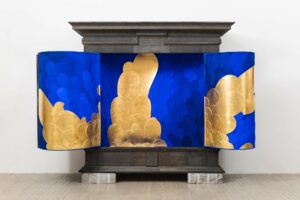 The use of the colour blue in interiors

Knowing the meaning and science behind the colour blue and its links to our emotional wellbeing can help designers to integrate it into interior design schemes. Blue art is one customisable way of doing exactly this. 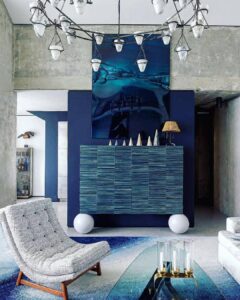 As decorative artists we often draw influence from the Renaissance period, which is when many of the techniques we use gained popularity. Making sure we do justice to these techniques requires using the same natural pigments used by the maestros who brought them to popularity. Ultramarine blue, for example, was one of the finest and most expensive blues used in decorative art in the period. It was associated with holiness and humility, so was mostly reserved for the robes of the Virgin Mary. 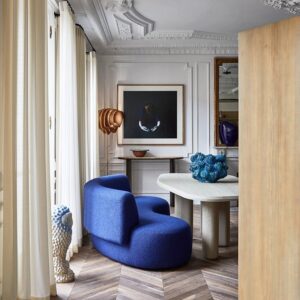 Part of our mission to use traditional techniques and aesthetics in intriguing new ways involves reimagining the use of traditional pigments like ultramarine. Some of our most recent projects using the vibrant tone include an amorphous, organic sculpture and bas-relief panel inspired by the rough topography of natural rock. Both are examples of blue used with boldness and confidence to create an artistic statement. 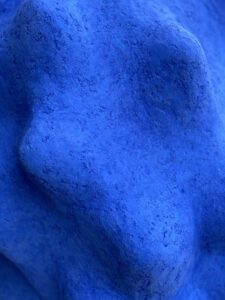 These kinds of deep, dramatic tone can work well in monochromatic interior design schemes. Set against stark white walls and with minimalist furnishings, pops of ultramarine blue art draw the eye and expand the space. We often choose more muted shades for trompe l’oeil murals, where the pigment expands across a larger surface. Sometimes, though, there’s room to push the boundaries and extend deep blues across multiple surfaces. The magic of blue art is in exactly this – its timelessness and adaptability.

Want to commision us to create original artworks? Please contact us here.