Home / Blog / The Making of Morphis

One of the greatest things about working with classical techniques is that we have centuries worth of knowledge to learn from. With that comes great responsibility, but also limitless possibilities to veer off tradition and experiment with using age-old techniques in contemporary art.

That was the rationale behind Morphis, one of our newest contemporary sculptures that’s now a finalist at the prestigious RHA exhibition in Dublin. We wanted to experiment with texture, colour and shape – moving away from the confines of tradition and towards total freedom of expression.

This month, I (Noel) am going to share with you the creative process behind Morphis from concept through to completion, which took about four to five weeks. We’ve had quite a few requests for this kind of explanatory post, so feel free to let us know what you think of it.

The inspiration behind Morphis

On my first night out of hospital after contracting Covid-19, a vision came to me of the structure and form of Morphis. It’s a homologous sculpture that represents the coming together of two people in life. We’re all individuals with our lumps and bumps, good and bad experiences. But uniting as a couple creates a new energy and entity – a new life emerges from that. The larger flourish at the top of the sculpture represents that unified energy, while the two smaller ones represent the two individuals. 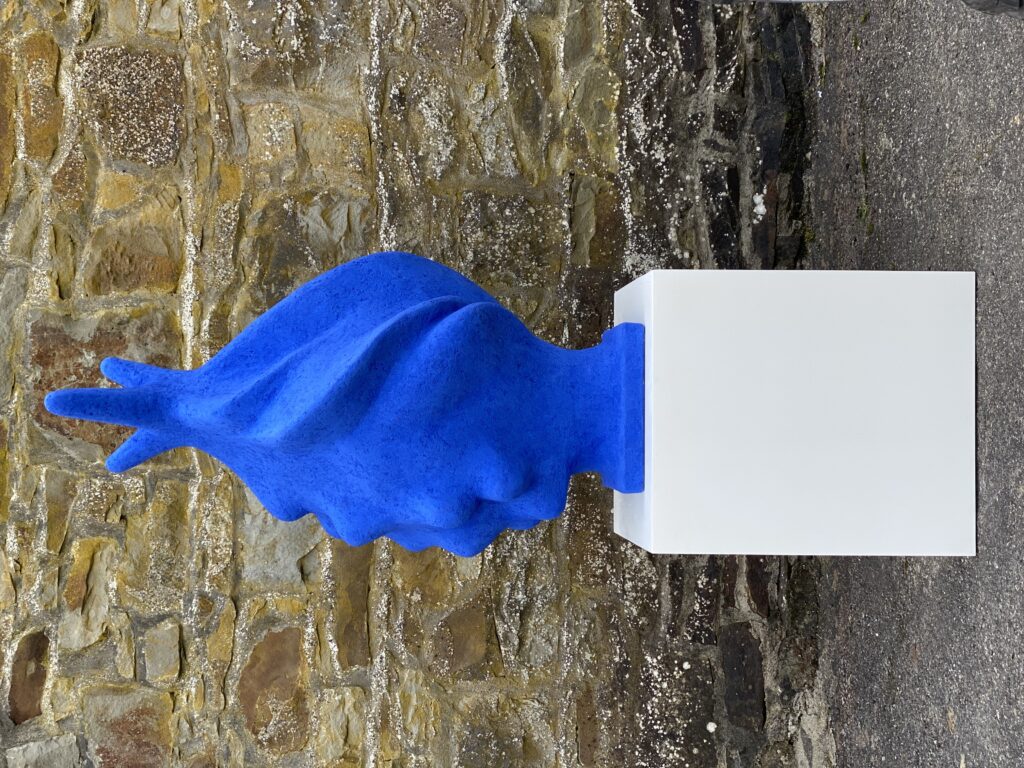 Pencils and paper are always the building blocks of our work. The morning after I had that vision, I sketched out the image before letting it sit with me for a while. This initial drawing evolved into a shaded three-dimensional drawing, to which I gave shadow and light before transferring onto graph paper. At this point, I had a clear image of the size I wanted this piece to be. It’s about 1.1 metres high and sits atop a sleek white plinth. 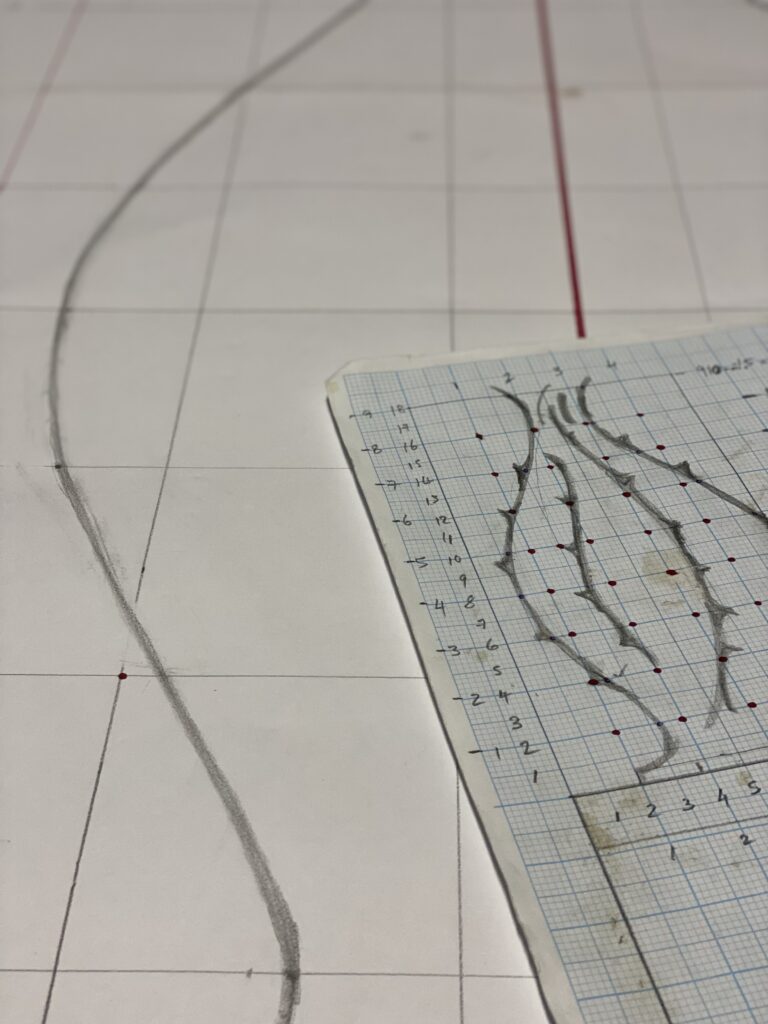 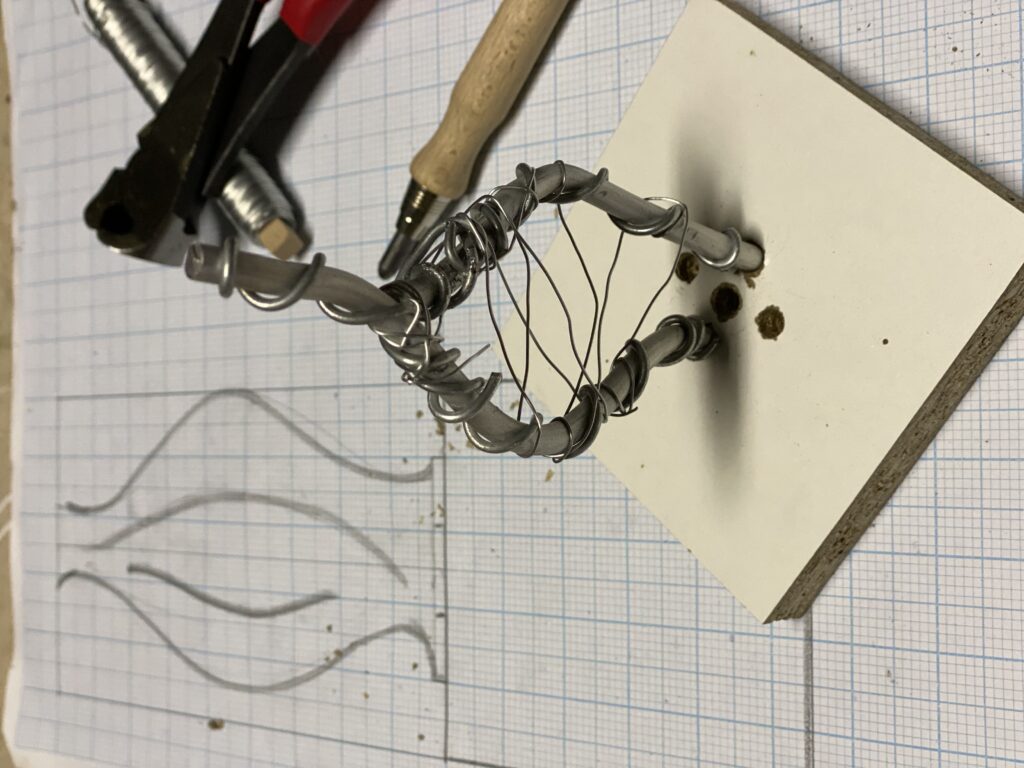 These simple pencil drawings help me to develop the clay maquette – a rough, scale model of the sculpture. What changes when you move from 2D to 3D is the sense of touch, texture and scale that you get from having the material in your hands. The beauty of clay is that it’s an extremely malleable and responsive material. And as I moved my fingers through the maquette, it evolved into something else. 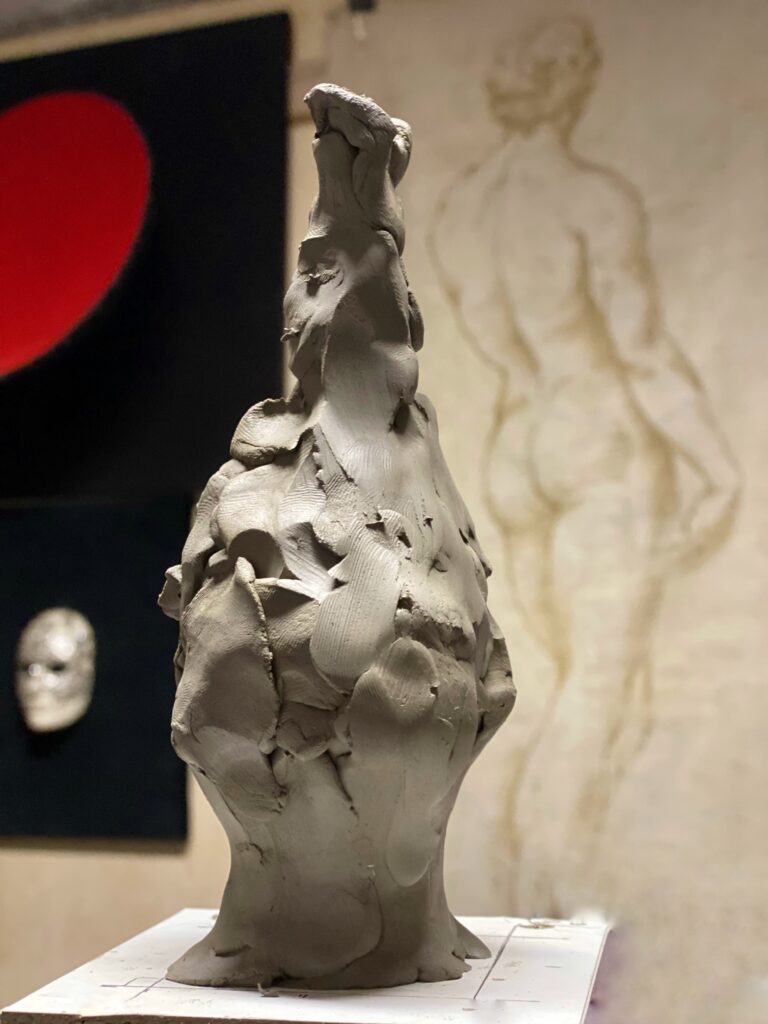 Moving from the 2D sketch to the 3D maquette is a big leap, but also a very liberating process. The ability to work the clay as it rotated on a turntable meant I could clearly see the interplay of shadow and light, too. That’s such an important aspect of sculpture because when it’s lit, you have to consider how the shading captures its form. Morphis is very fluid, which made that interplay even more important. 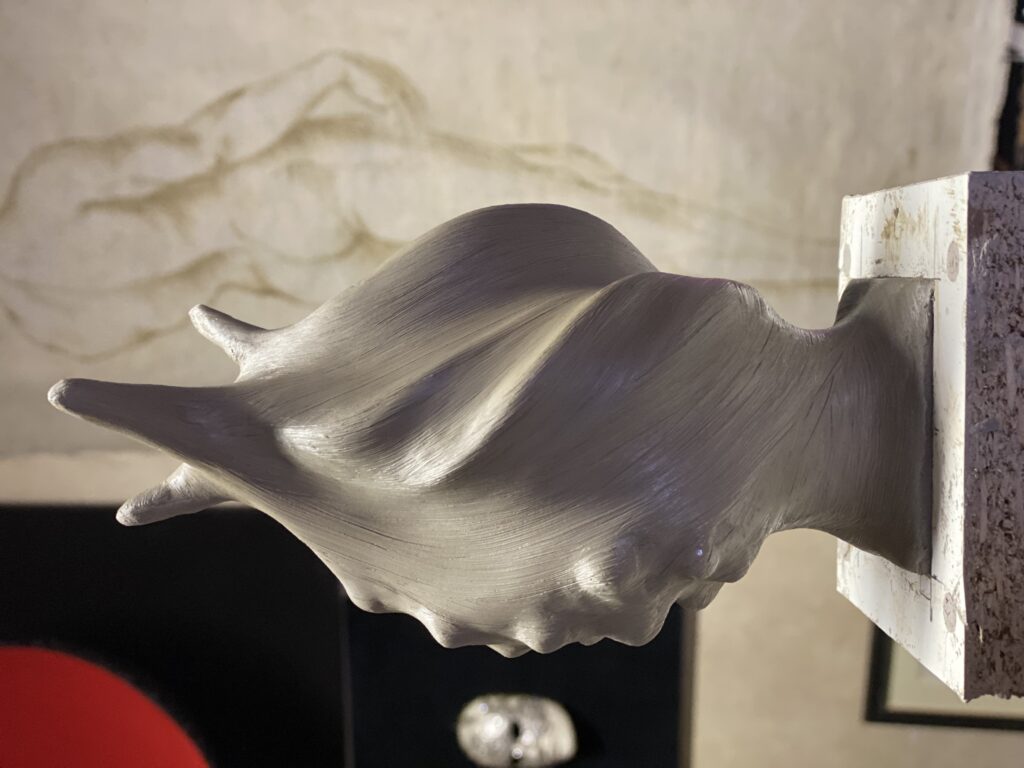 Creating the sculpture’s internal substructure, or skeleton, involved splitting the form vertically in 100 millimetre levels using calipers and then creating two layers of mesh around it. I then dissected the sculpture form by impaling it with timber sticks, around which I wrapped more steel mesh.

It can be difficult to encapsulate in words, but I like to think of it like sticking toothpicks into the outside skin of an onion. It gave me the height on which to build the sculpture’s form. 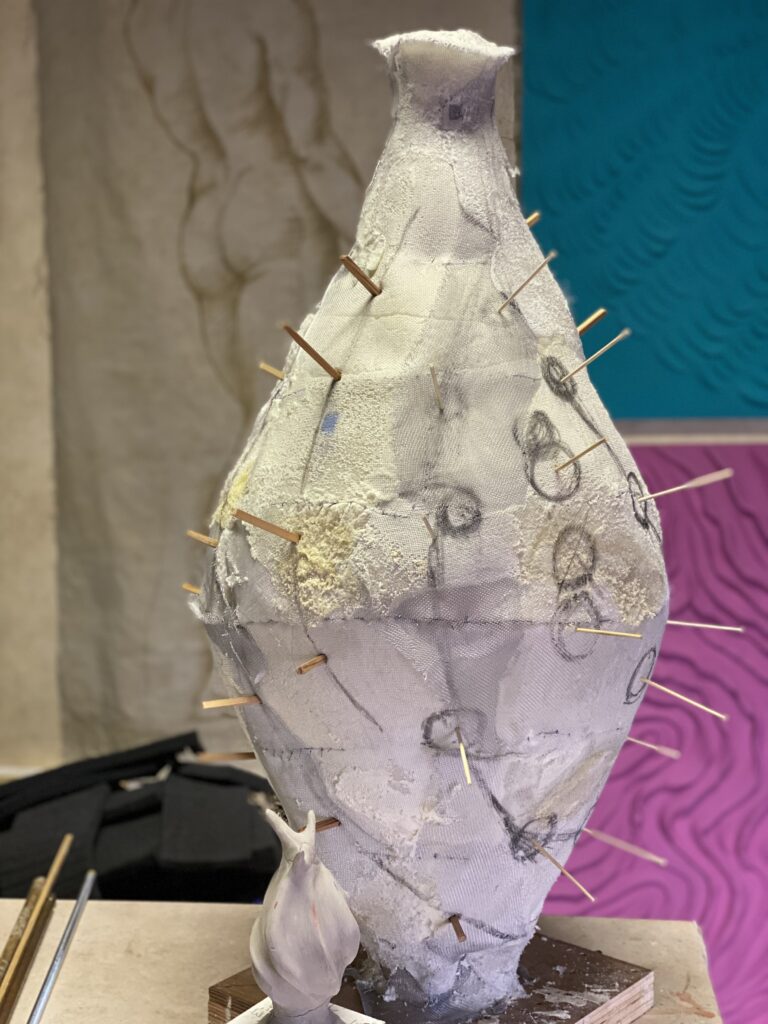 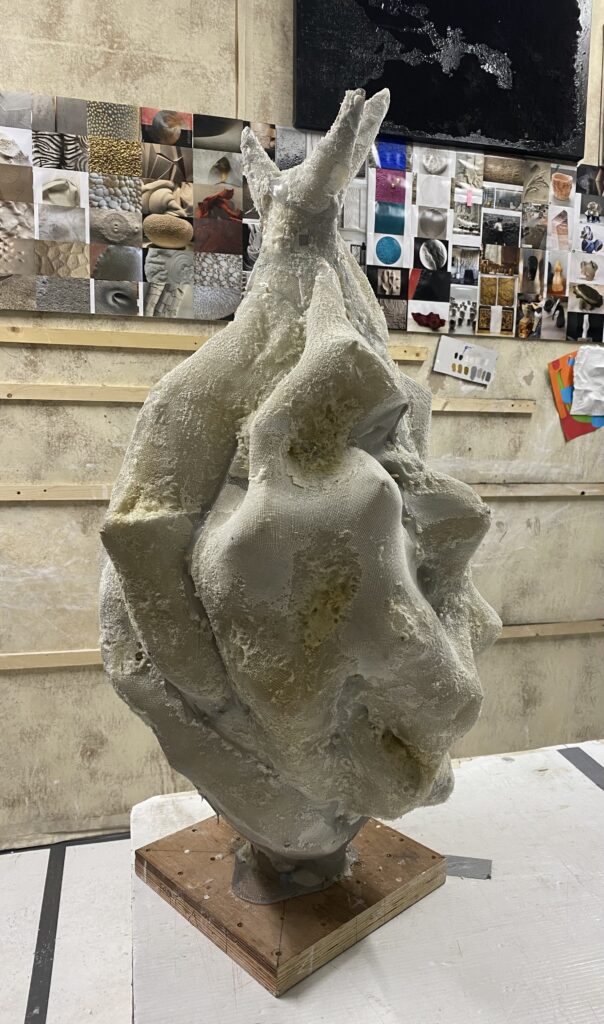 The choice of materials and textures

Scagliola mixed with very finely sieved sand was the main material I used for Morphis. In any kind of rendering, the first coat is rough and the second coat is the finish. I added the first rough layer and it was beautifully raw in a kind of grey colour. Then, in the second and final layer, I used the same material and began to play with it on the surface. 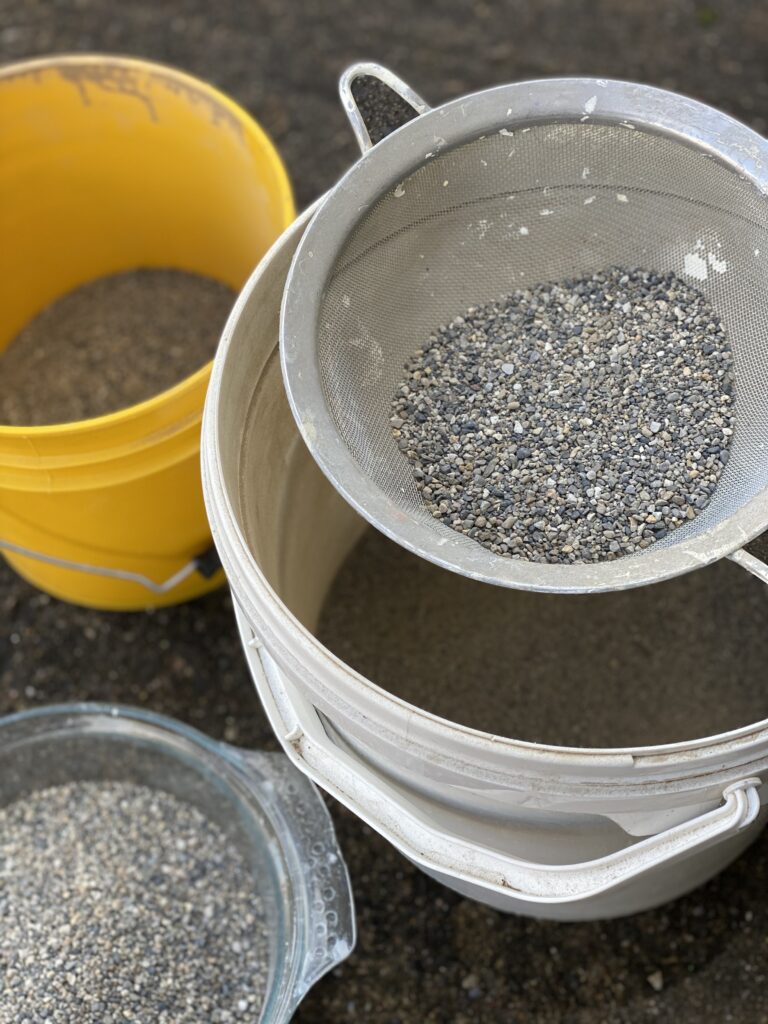 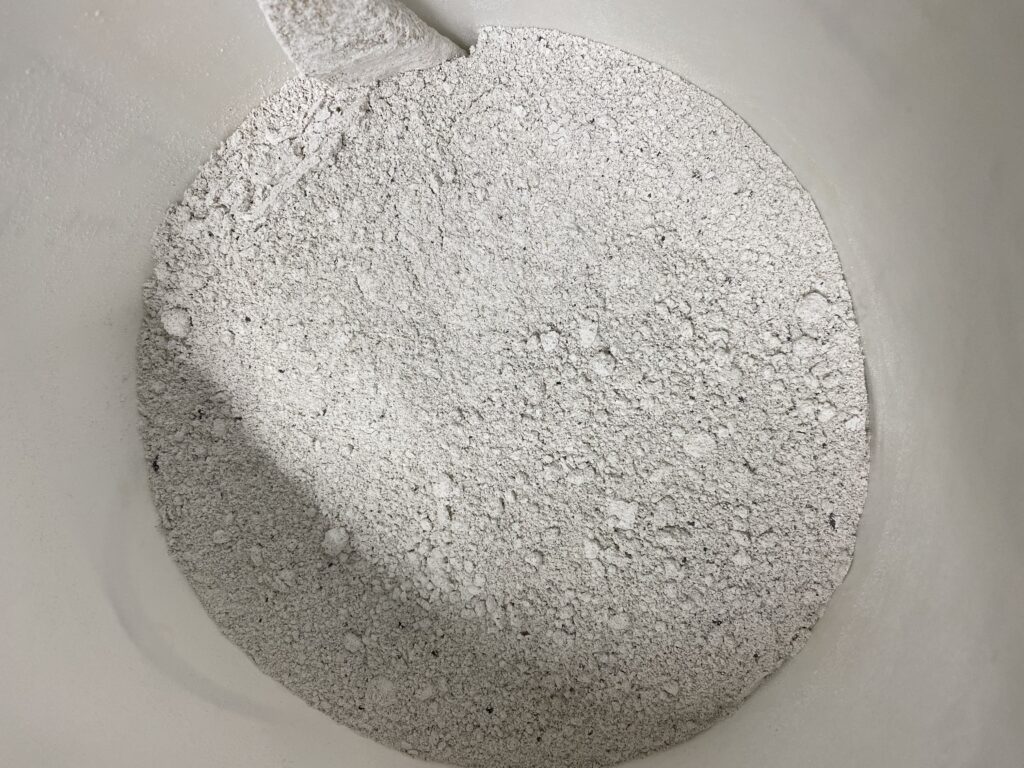 Interacting with scagliola like this gave a complete sense of playful freedom. As I mentioned at the start of the post, all of the work and training we’ve done in the past is a traditional foundation on which we can play and experiment. It was amazing to be in the moment and go with the flow.

To create the texture, I applied the scagliola to the skeleton and began to level it out. I then scraped away at the surface to reveal some pitted areas, before lightly using the back of the spatula to burnish over it. This creates the impression of smoothness, but there are undulations all over the surface. The scagliola sculpture is left to rest for a week before painting starts. 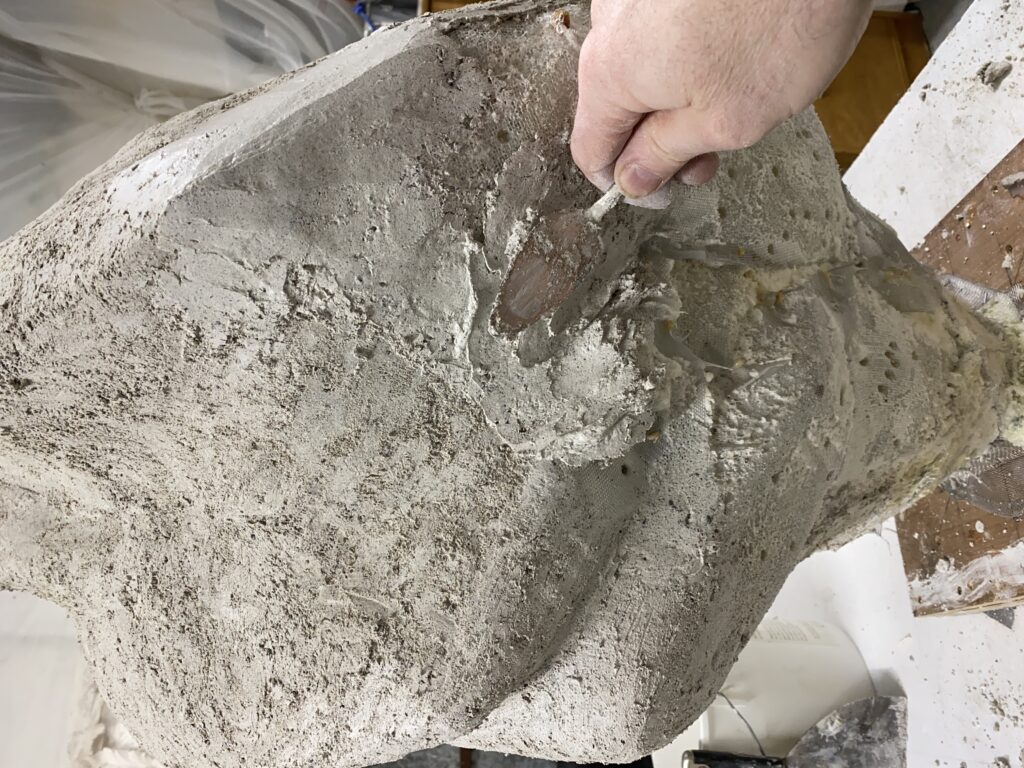 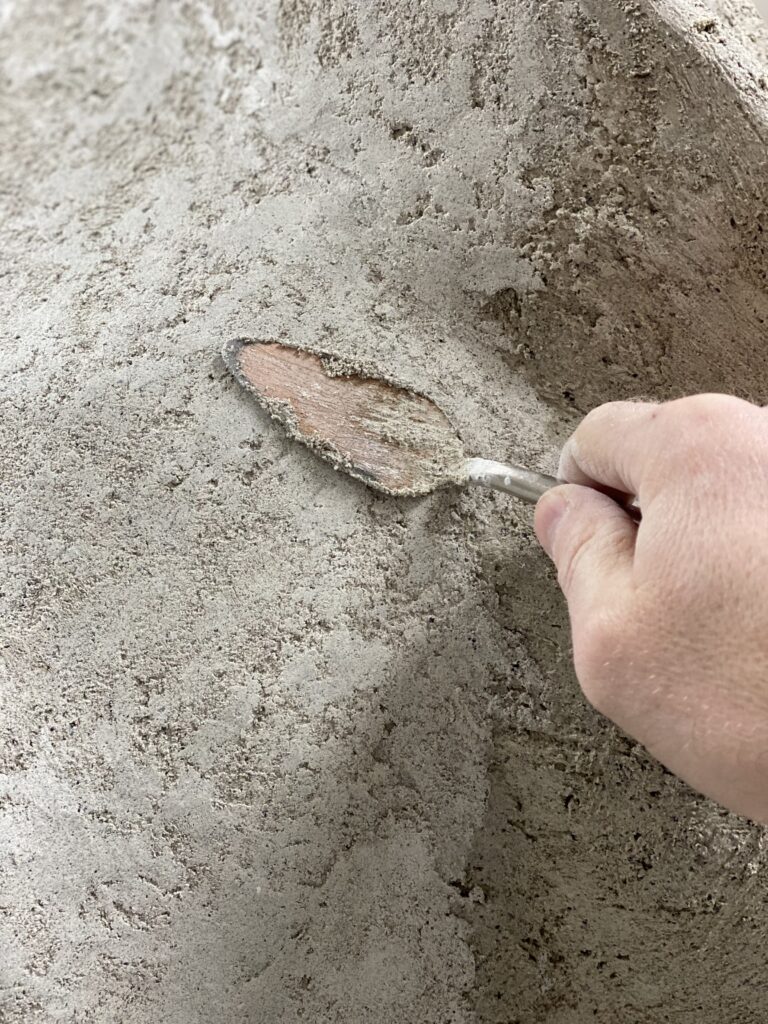 Making a statement with colour

Morphis could have been left as above, but we wanted to make a statement with this one. We had some wonderful tempera pigments in the studio from Dolci Colori in Verona, Italy, and I mixed a combination of ultramarine blue, cobalto blue and titanium white. In total, I created 12 layers of various transparent shades of that mix. Using tempera gave a beautiful matte finish without filling any of the holes, so that all the texture remains. 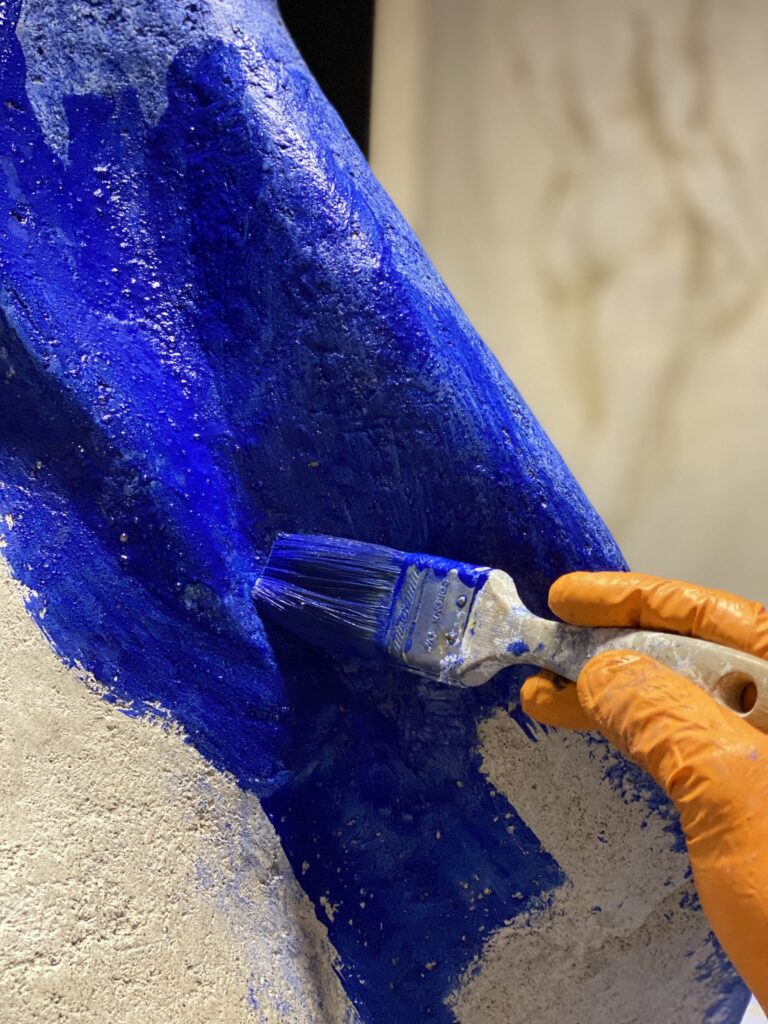 The choice of sleek, white plinth elevates the blue even more – this colour combination is so important. A plinth is critical in sculpture and the way you display those colours can define the entire finished piece. 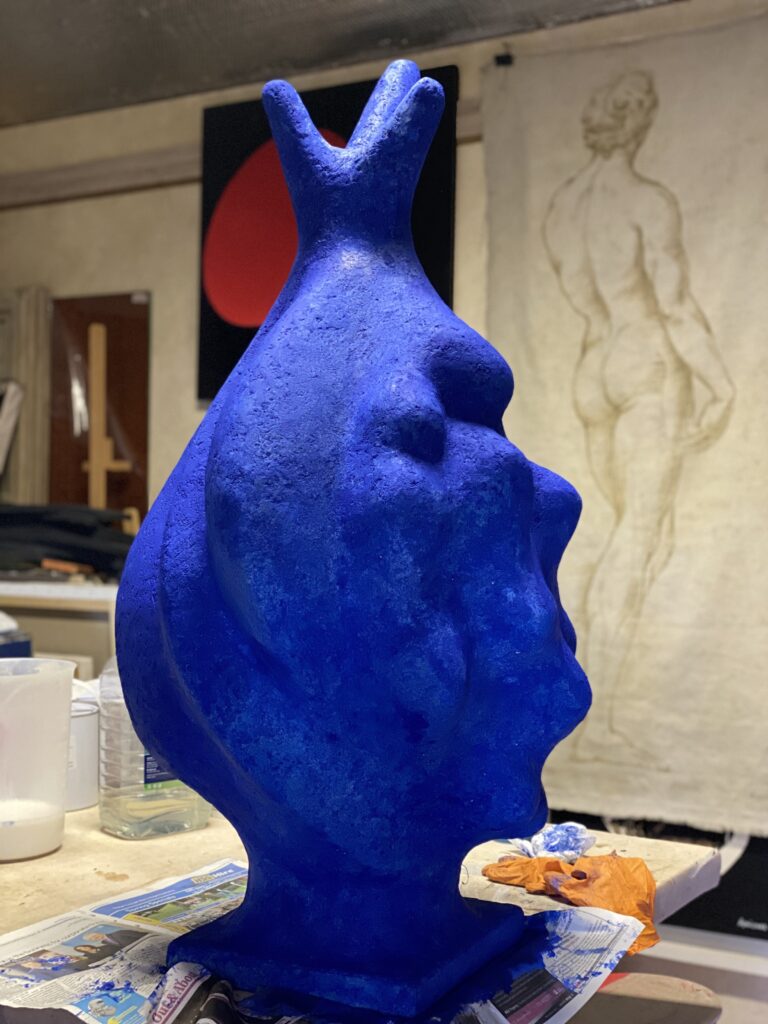 The end result, an exhibition-worthy piece

Morphis is the first sculpture that I or Pigmentti have had exhibited at the RHA – a renowned Dublin-based exhibition that’s adjudicated by and for artists. There were 3,900 works submitted and 323 were selected for the exhibition, so it is quite an achievement! The exhibition opens on September 27th and runs until early December, with the prizewinners announced during that time. 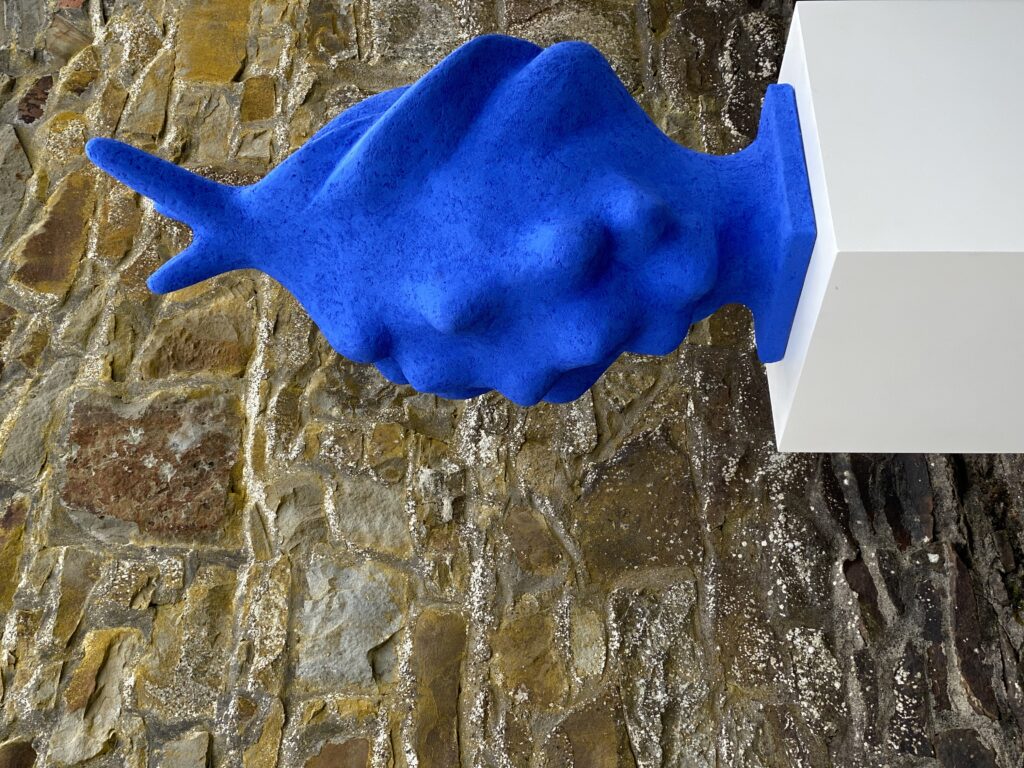 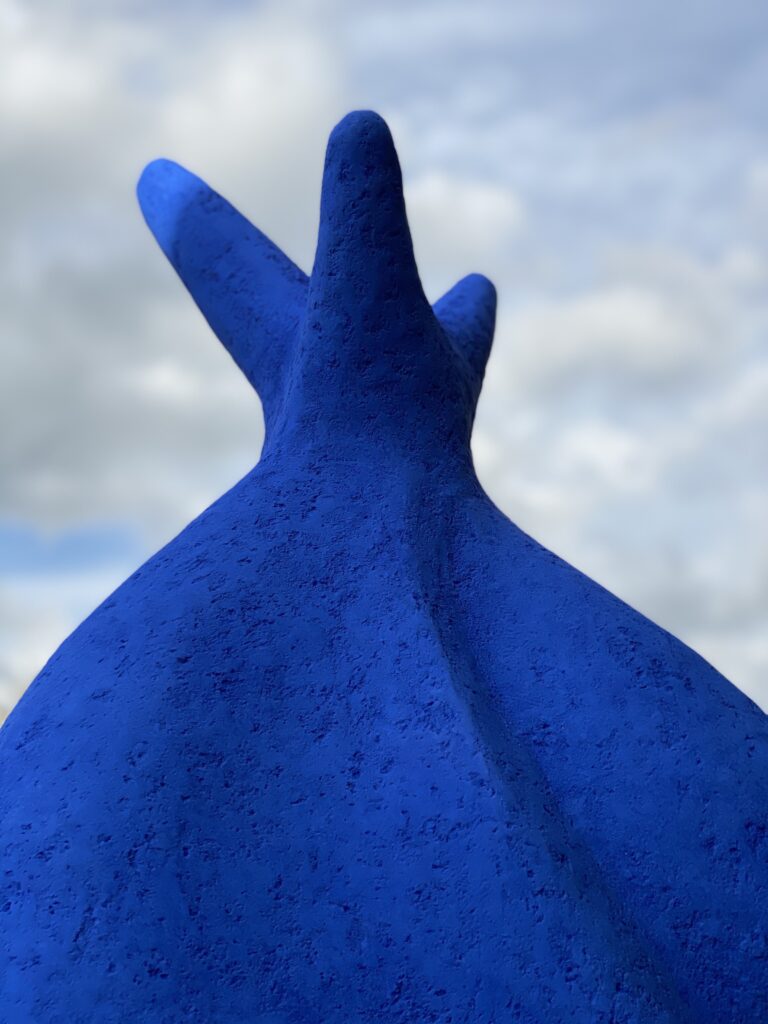 We’ll be keeping you updated on Morphis’ journey at the exhibition and if you have any questions about commissioning a sculpture, please get in touch at info@pigmentti.com